From C. Derick Varn: I talk to Ben Lewis on the Second International materials that remain untranslated and why they are important. You can find …

The Introduction to my forthcoming book, ‘Oswald Spengler and the Politics of Decline’, is now freely available on the Berghahn Books website. Happy reading! BL

A rewarding discussion of my book with Barry Healy, which also discussed how the history of German Social Democracy and war might shed light on …

Oswald Spengler was one of the most important thinkers of the Weimar Republic. In Oswald Spengler and the Politics of Decline, Ben Lewis completely transforms our understanding of Spengler by showing how well-connected this philosopher was and how, at every stage of his career, he attempted to intervene politically in the very real-life events unfolding around him. The volume explains Spengler’s politics as the outcome of a dynamic interplay between his meta-historical considerations on world history on the one hand, and the practical demands and considerations of Realpolitik on the other hand.

The book will be published in July 2022 and can be pre-ordered from Amazon or via Berghahn Books. 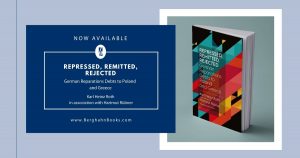 Since unification, the Federal Republic of Germany has made vaunted efforts to make amends for the crimes of the Third Reich. Yet it remains the case that the demands for restitution by many countries that were occupied during the Second World War are unresolved, and recent demands from Greece and Poland have only reignited old debates. This book reconstructs the German occupation of Poland and Greece and gives a thorough accounting of these debates. Working from the perspective of international law, it deepens the scholarly discourse around the issue, clarifying the ‘never-ending story’ of German reparations policy and making a principled call for further action.